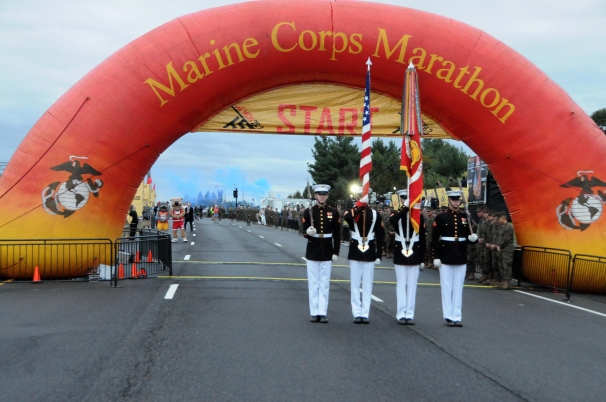 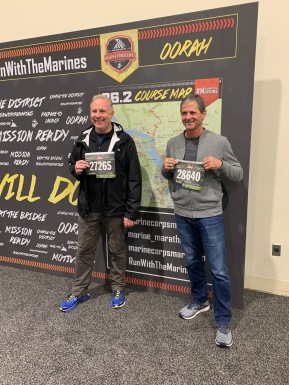 It was easier than I ever imagined. Having dinner with Pat from Texas and our wives I said, “Hey Pat, let’s do something irresponsible together.” “Sure,” he said. “Like what?” “Let’s run in the Marine Corps Marathon in Washington, D.C. this October,” I said. “I’ve never run a marathon before,” Pat from Texas said. “You can find stuff on the internet to tell you how,” I said. “Okay,” he said. What could possibly go wrong? 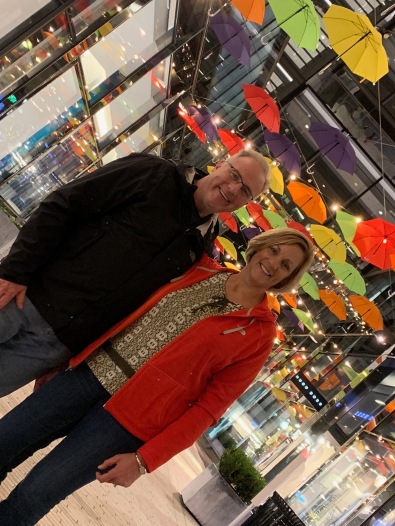 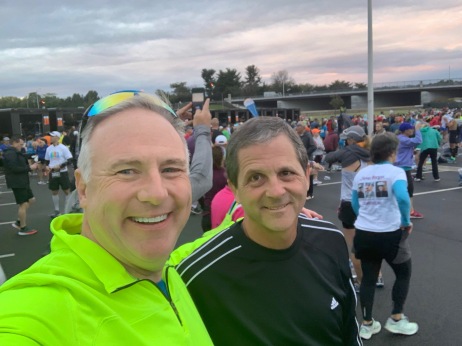 We stayed in Center City Washington, DC and planned to take the Metro to the race and we were so glad we got an early start! It seemed that all 30,000 runners rendezvoused at the Metro stations on race morning. We secured our seats on the train but we passed station after station with runners waiting on the platform as full trains passed by them.

We arrived at the Pentagon Station and made our way to the starting line. About 2,000 marines and sailors provided support and we even had a howitzer fire at 7:55 AM to start the race! 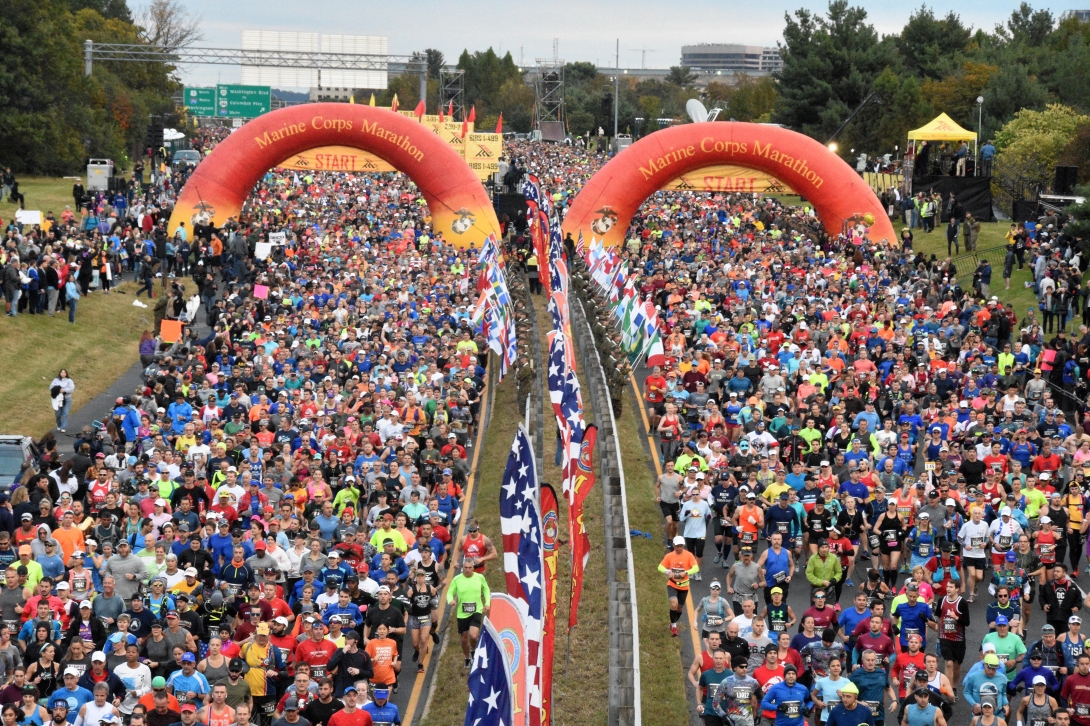 I ran this race in honor of my family member T/Sgt Delmar Dotson (see medalsofhonor.org) who is buried at Arlington National Cemetery which is along the race route (read his story here). Another amazing feature of the Martine Corps Marathon is the Blue Mile which honors many fallen heroes. You run between American flags and large pictures of fallen service members. In some cases, families of the fallen service members are standing by the photo of their loved one. I saw one runner kneel down and cry before one of the pictures of a Marine that had died in combat. I took a short video of my run through this incredible experience: 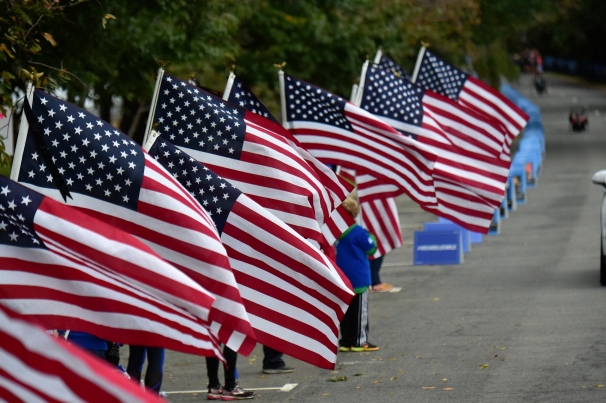 The weather was cool and cloudy with 90% humidity. My only race problems were navigating through the massive throng of people at the start of the race. The support by the Marine Corps personnel was outstanding and I didn’t even mind the uphill run to the finish line. 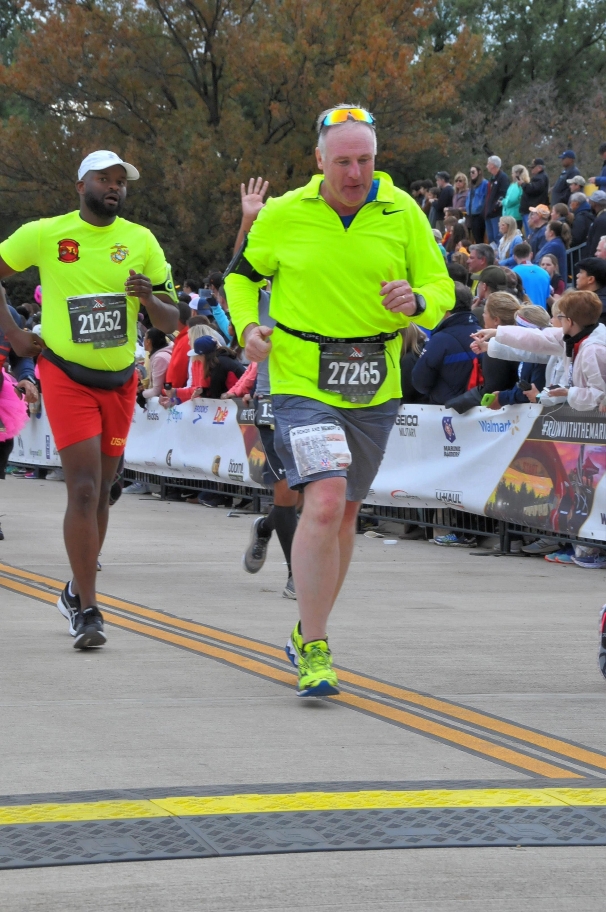 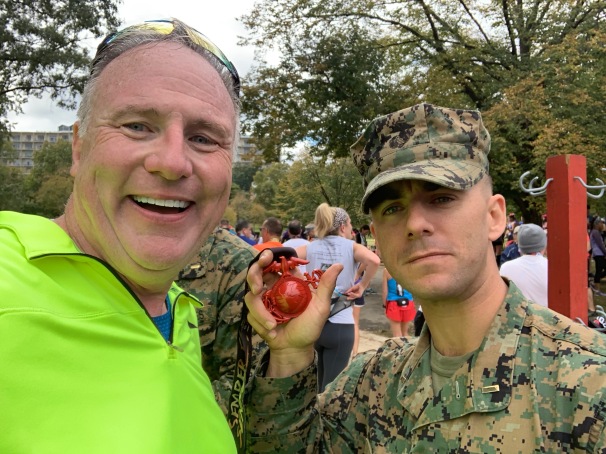 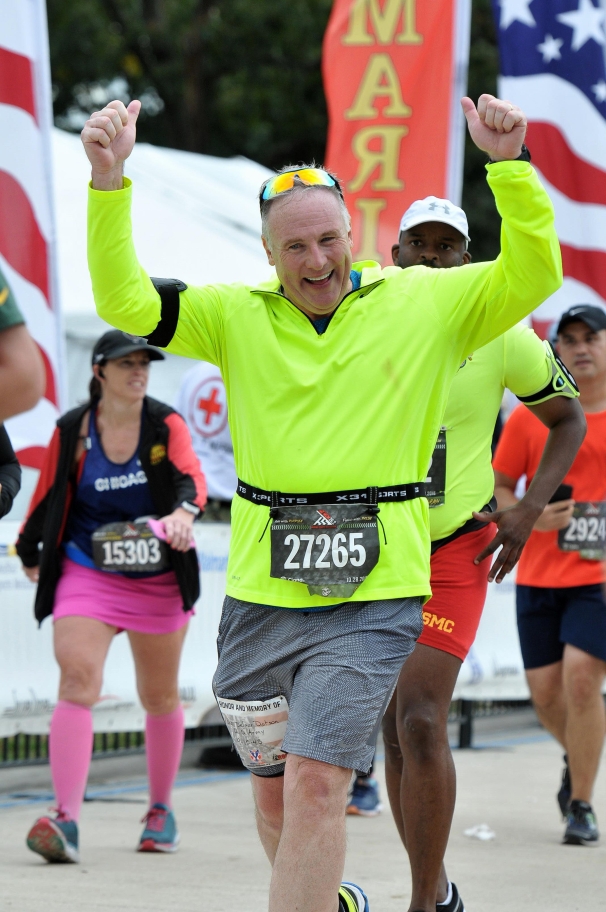 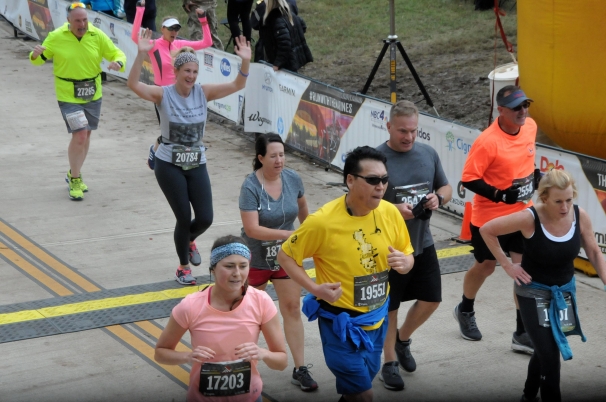 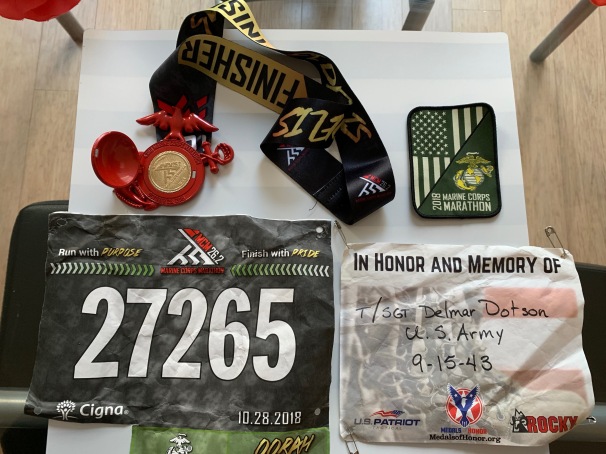 I wrote about this marathon in a previous post so I will summarize the 2018 version of this race: Hot. Humid. Sunny. Miserable.

This is a great race with a fantastic support system in my home city. Running to benefit the children of St. Jude Hospital is worth any misery! We ran through the hospital campus with many patients and parents waving us on in an inspiring stretch of the race.

The unusual feature of 2018 was that the race was delayed twice because of heavy thunderstorms in the area. Once the rain moved on the sun came out and made the weather mid-70s and very humid. The heat took a toll on me but I finished the race. Unfortunately the delays meant that I missed my flight to Atlanta to speak in a church the next day so I had to hurry home, clean up, eat, and drive 6 hours to Georgia.

Did I mention that the St. Jude kids were worth it? Because they are. Oh, and guess who was in the house? 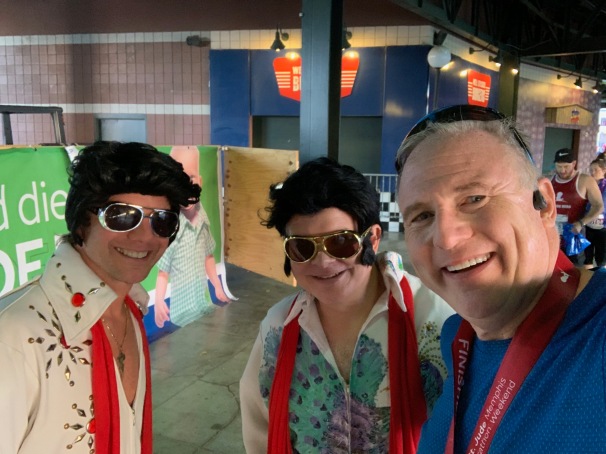 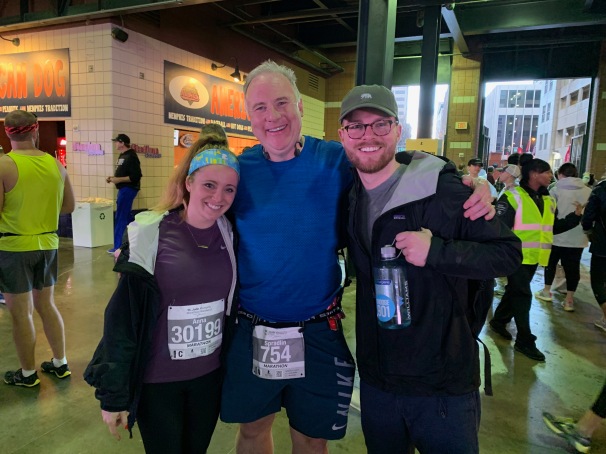 Mid-America students are the BEST!! 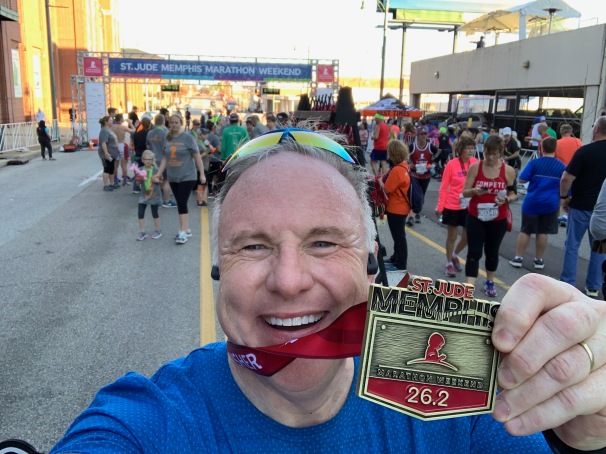 It was easier than he ever imagined. Talking with fellow Mid-America Administrator Brad after running two marathons in two months, Brad said, “Hey Mike, you should try to join Marathon Maniacs.” “Sure,” I said. “How does it work?” “All you need to do is run three marathons in 90 days, ” he said.” “I’ve never run three marathons that close together before,” I said. “You can find stuff on the internet to tell you how,” he said. “Okay,” I said. What could possibly go wrong?

I found a marathon that fit the time frame, was on a Saturday, and was located near some friends that I wanted to visit. Also, the race supported aviation and I love airplanes. A perfect match!

The race started at the Museum of Aviation and then moved to Robins Air Force Base. We had to surrender our ID’s for the duration of the race which was new for me. My only worry for race day was the heat and the fact that the race had a six-hour cutoff time for the marathon. Also, the marathon had a low number of participants so I knew that I might be “Tail End Charlie” for much of the race. (I.e. dead last). 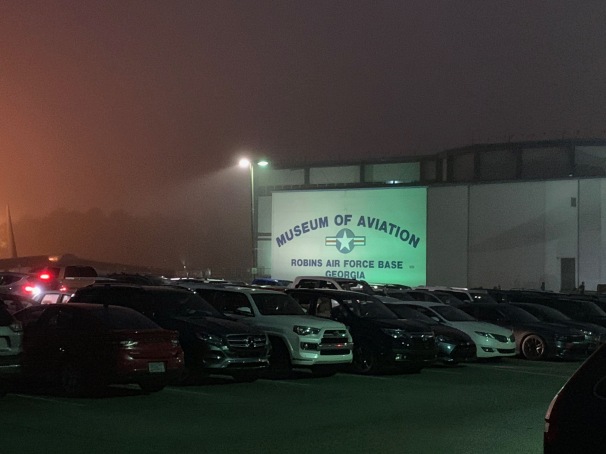 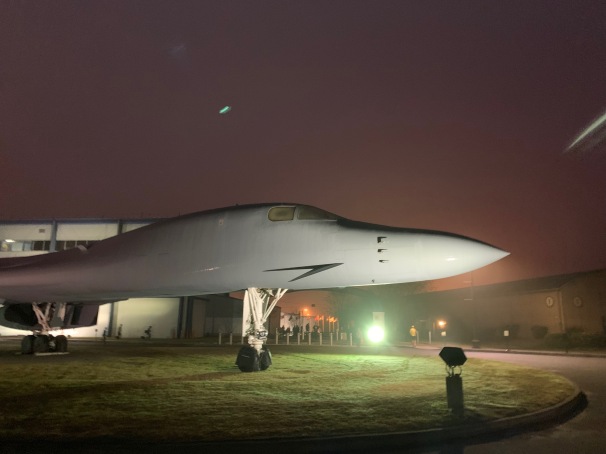 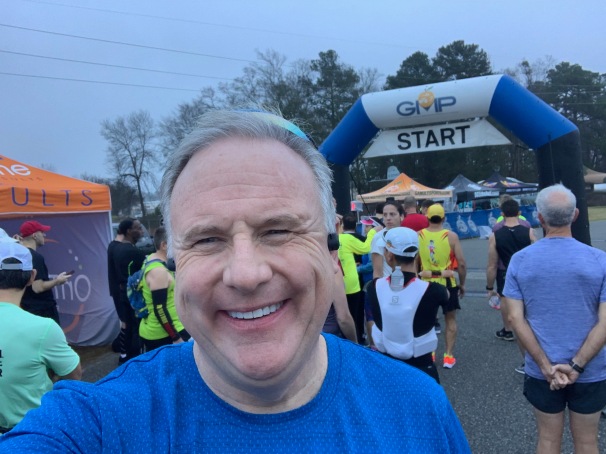 Race start was humid and in a fog alert. Another marathon in the mid-70s. . . in January. Oh well, at least we had high humidity. 😦

The race started well and I met some really cool fellow runners. Tom from Dayton informed me that he was running in his 74th marathon. Todd from Nashville was running his 34th marathon. All I had to do was finish my 3rd in three months (fifth all-time) and I was in!

The heat got to me about mile 20 and I cramped up so I started speed walking the last six miles. I felt it would be close but I finally knew that I would make that six-hour cutoff. I thought.

At 25.5 miles, with only 7/10s of a mile to go and over twenty minutes left a vehicle pulled up next to me and the driver told me he was going to take me off the course. Air Force security needed everyone off the base. I protested that I was going to make the cutoff time but he told me I had no choice. I took the ride and thought I was DQ’ed (disqualified). I was too tired to be mad but what could I do? It turned out Todd from Nashville came to my rescue.

Todd had a plan. He said once we were through the security gate we could finish running our distance before we crossed the finish line and then appeal to the race director for a ruling. I was too tired to appeal anything but I had nothing to lose. And, after all, when would I have a chance to run three marathons in three months again.

Todd from Nashville and I got out of the vehicle and went through security and looped the parking lot until our Garmins both said we had done the distance, even accounting for the vectoring (additional distance because of not taking the turns tight enough) I had accrued. We finished and I went to see the race director. He looked like a man who didn’t want anyone else complaining to him this day.

I told him my name and my predicament and he asked me if I was one of the guys that had been running circles in the parking area. “Yes,” I said. He shared that the decision to pull the final runners had been an Air Force decision but that if I had done the distance before crossing the finish line then my time was good. YES!!

Later that night when I checked to make sure my time was posted I discovered the most amazing part of all. Not only did my finish time count, but as it turned out, I finished in third place in my age category! My first race trophy!! Apparently, enough people dropped out or timed out that I made the third-place finish in the men’s 55-59 age group. How many 55 to 59-year-old men finished the race you may ask? Well, if you must know the answer is three. So, I can truthfully say that I finished last in my age group or in third place in my age group. I’ll let you decide which one is my story. 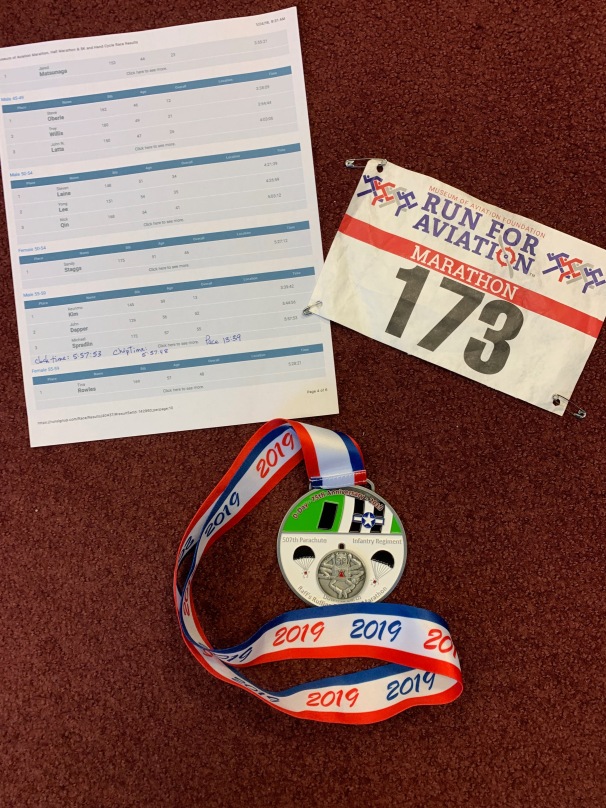 The last shall be first, but third will do in a pinch.