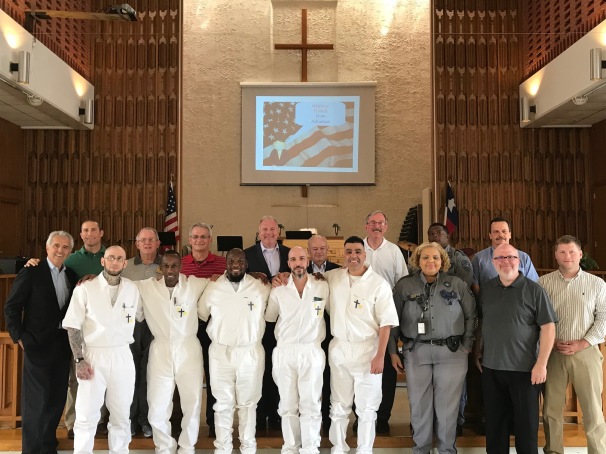 You are looking at one of the most remarkable pictures you will ever see. Of the eight seminary graduates pictured, five are on the front row (and wearing identical clothes). In fact, a higher percentage of the inmates have graduated from seminary (100%) than the other Christian ministers pictured. Since some have a need to label human beings I will provide the labels and you can see if you can correctly apply them to the people in the picture. Are you ready? Some labels can be applied to more than one person: former policeman, Baptist denominational executive(s), senior warden, prison chaplain(s), prison guard(s), chief of prison security, educator(s), Navy fighter pilot, prison system official(s), pastor(s), New Testament professor, prison field minister(s), seminary president.

The pictured men in the white uniforms are the product of a remarkable program that allows inmates, mostly felons with life sentences, to earn a seminary degree while incarcerated. Upon graduation from the seminary program with an accredited baccalaureate degree, they are transferred to another prison as “field ministers” to assist the prison chaplain in ministry and evangelism among the inmate population. The testimonies of the impact they are having are impressive, to say the least.

I am in this picture because Mid-America Baptist Theological Seminary and the Arkansas  Baptist State Convention are studying and praying to see if this program could happen in the Arkansas prison system. Perhaps it will. Nothing is easy and many hurdles must be overcome.

Now back to our test. Were you able to identify correctly the people in the picture?  Here is the right answer:

(10) And have put on the new self who is being renewed to a true knowledge according to the image of the One who created him–(11) a renewal in which there is no distinction between Greek and Jew, circumcised and uncircumcised, barbarian, Scythian, slave and freeman, but Christ is all, and in all. Colossians 3:10-11 (NASB)

If the Scythians can be saved, then even you and I have hope.