I always look up for helicopters.

Loving all things that fly is a passion I got from my Dad. As a new reserve chaplain in the New York Army National Guard, I could not have been happier that I was assigned to an Army aviation unit. The 3-142 CSAB (Combat Support Aviation Battalion) became my military home and it was a perfect place for a new Army chaplain.  Lt. Col. Murray, our commanding officer, Maj. Mike Swezey, our battalion XO, and CSM Quantock, our Command Sergeant Major, all took me under their wings, and I will forever be indebted to them. 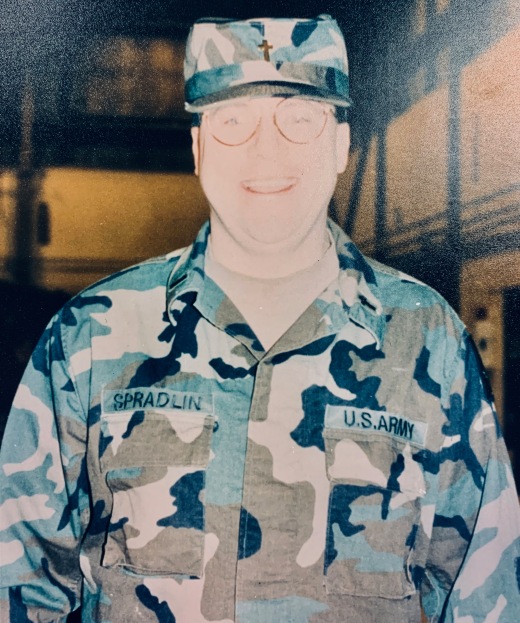 The men and women of the unit were incredible people, and I prayed for them with a passion. They were my soldiers, and I was their chaplain. For personal training, I would run up a steep hill in our neighborhood, and I would tell myself that if I could make it up that hill I could tell some people about Jesus. Preaching Anytime, Anyplace, Anywhere. Hooah.

Of course, there were challenging moments that they did not teach me about in seminary. Like the time in a staff meeting, the CO (commanding officer) told me it was my responsibility to make sure the weather was good for the upcoming training mission. “You know, Chaplain, Gen. Patton told his chaplain to pray for good weather at the Battle of the Bulge and they got it. You say you’ve got connections, so use them.” “Roger that, Sir,” was all I could stutter. (Note: the weather was great for the training Op. You’re welcome, Sir).

How could I forget the Saturday I was included on the flight manifest for a formation of six Blackhawks on a gorgeous Fall Saturday? The mission was to deploy some assets near the West Point Military Academy firing range. We flew down the Hudson River Valley (IFR = “I Follow River”) and, after completing the mission, the formation made a “navigation error” and circled the Army football stadium while the football game was being played. The crowd loved it but when we returned home and landed a very angry general was waiting for us. We were all lined up, and as he passed me in the line he looked at me said, “Even our own chaplain was a part of this.” I was scared to death. Fortunately, that was the end of the matter.

The senior chaplain in our state wanted me to be the officiating chaplain for the Presidential Honor Guard for President Chester Arthur (1829-1886).  On every president’s birthday, an honor guard holds a ceremony honoring their service to our country. My job was to show up on time and in uniform, march in formation, and pray when called upon. Yes, Sir. Anytime, Anyplace, Anywhere. 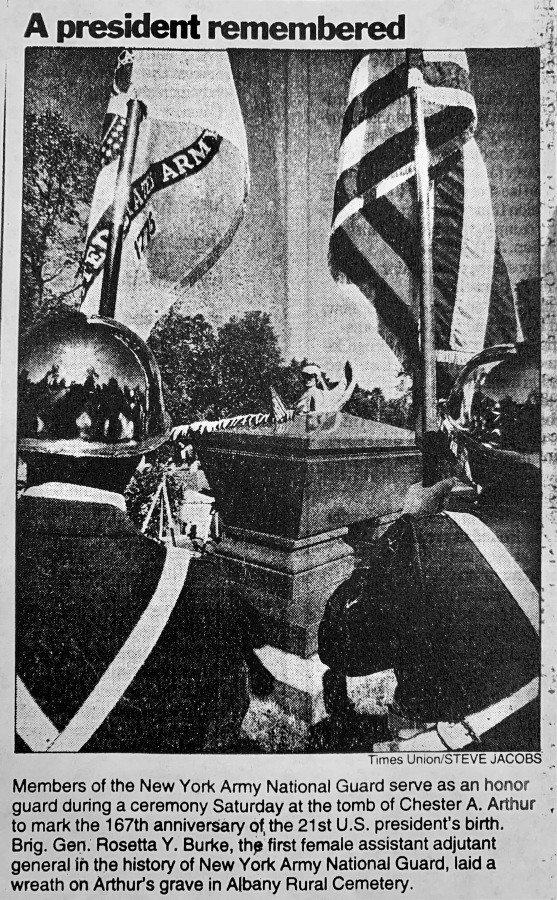 The day after Christmas 1996 Lt. Col. Murray called me early and said, “Chaplain, I need you to come in. We’re going to Bosnia.” I was stunned. This was during a difficult time in our personal lives.  Our daughter, Laura, had just been born after my wife, Lee Ann, had spent 91 days in the hospital. (Two days later I would get my first call from the presidential search committee for Mid-America Baptist Theological Seminary). As the mobilization progressed, we learned that the entire battalion would not deploy; some of us would provide stateside support. That group included me. 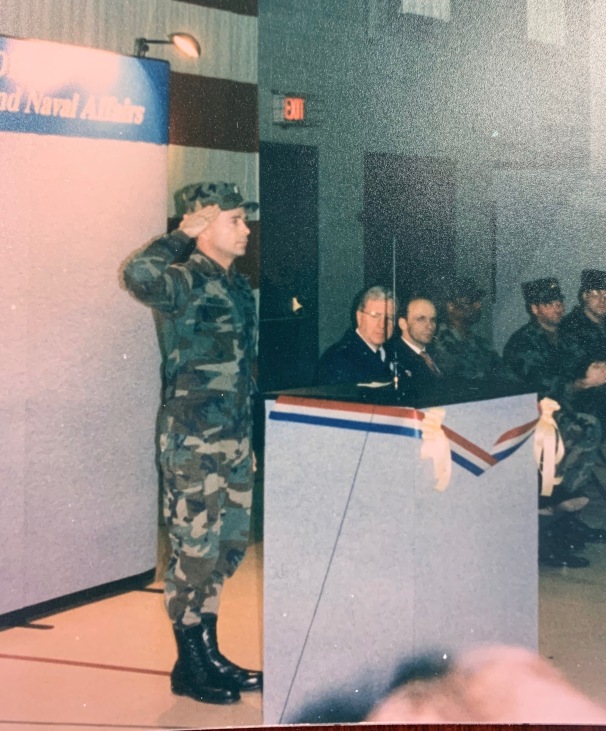 Lt. Col. Murray, a great leader and mentor to me

For me, this was a challenging time because I wanted to minister to soldiers who were under tremendous pressure, but I was going through my own personal and family crisis. People would tell me, “Take things one day at a time,” but all I could think of was trying to get through the next hour. Preaching Anytime, Anyplace, Anywhere. 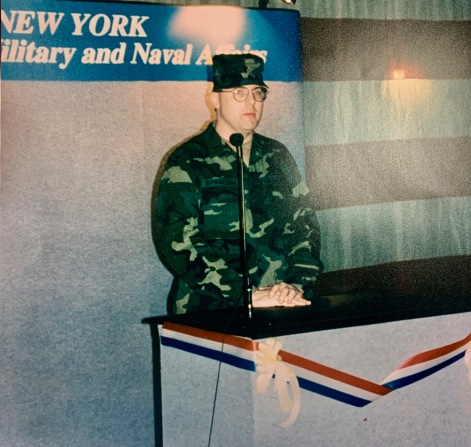 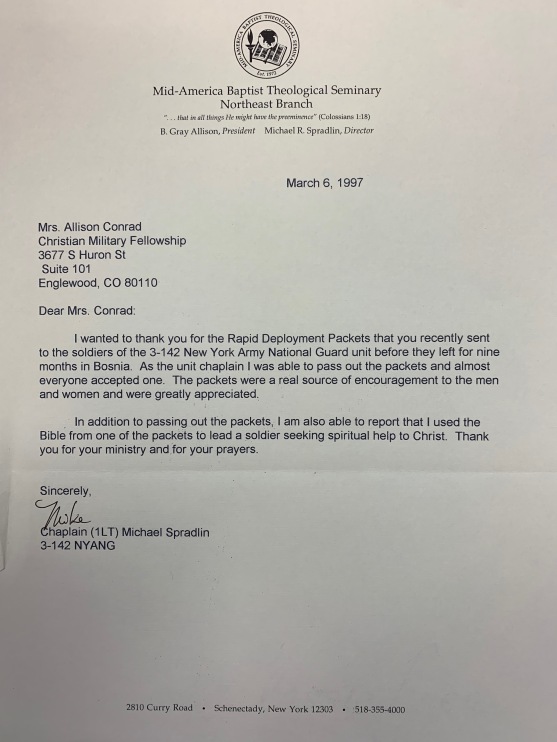 To All the World for Jesus’ Sake–The Mid-America Way

Our troops did a great job, but I missed the coming home ceremony.  The Lord had other plans for our family.  God moved us south to Memphis, Tennessee so I could assume the presidency of Mid-America and follow (gulp) Dr. B. Gray Allison. Roger that, Sir!

With the demands of being a seminary president, I gave up my chaplaincy ministry. I loved the ministry opportunities and learned a lot about leadership from some great people. I hung up my uniform, put on a suit and tie, and moved on. Or so I thought.

My great uncle, T/Sgt Delmar Dotson served with the 43rd BG (Bombardment Group) in World War II and died in New Guinea aboard a B-17 bomber. My presidential predecessor, B. Gray Allison, also served in the 43rd BG and was even in the same squadron as Delmar, the 65th. Since I wrote a book about them, I became involved in the 43rd Bomb Group Association. The 2018 group reunion was to take place at the Army War College at Carlisle Barracks, Pennsylvania, and I was invited to be a presenter. Roger that, Sir!! 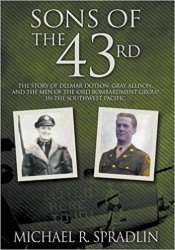 Before the meeting, the 43rd BG association president called me with an unusual request. In conjunction with our reunion, a reenactment group would be meeting and they wanted to hold a chapel service on Sunday. Could I officiate and hold a “World War II-style chapel service with a World War II-style sermon?” At first, I was hesitant because preaching is not acting, and I don’t want to “pretend” to preach. However, as I thought about it I realized that I would get an opportunity to tell more people about Jesus. “I’ll do it,” I said. “Okay, great. Would you mind preaching the sermon in a period uniform?” “Ugh, sure,” I think I said. Oh well, for a chance to preach, I’m in. Roger that, Sir!

The service was advertised to the community, and we met in a reproduction World War II barracks. We had a bagpiper with our group, so I asked him to do the music. I mean, hey, in the field you use whatever you can find, right? The room was full, the air was hot, and heaven came down. It was a powerful service, and several people afterward asked to speak with me. Special thanks to Stover Photography for making the awesome pictures. Also, a special thank you goes to all of the reenactors who made the weekend an incredible experience. Want to know more about the 43rd Bomb Group Association?

We know that our highest calling as believers in Jesus Christ is to our Lord. All earthly things, including countries, will ultimately pass away. However, I believe that service to one’s country can be a service of thankfulness. I am thankful to live in a place where the Gospel is freely preached. I am thankful to be among so many wonderful people who want to take the Gospel to the nations. In my mind, as I serve you, I am also serving Him. The call to ministry is a call to serve, and in my case to preach. Anytime, anyplace, anywhere.